The Persistence of Pirs

Posted on September 1, 2011 by Vladic Ravich

Villages in Azerbaijan can seem like introverted places to outsiders. But there is a place where people’s everyday hopes and fears are arranged in plain sight, usually in the form of a ribbon or a piece of colorful cloth tied to a tree.

A simple pir in Qax, typical of hundreds of these sites throughout the countryside.

These are the markings of a pir, a holy site usually associated with the grave of a holy person. While the tradition predates Islam, the pirs in Azerbaijan have grown rapidly since the collapse of the Soviet Union in both the Sunni north and Shiite communities in the rest of the country. Religious scholars say their popularity is as much a product of the country’s secular orientation as they are monuments of faith. 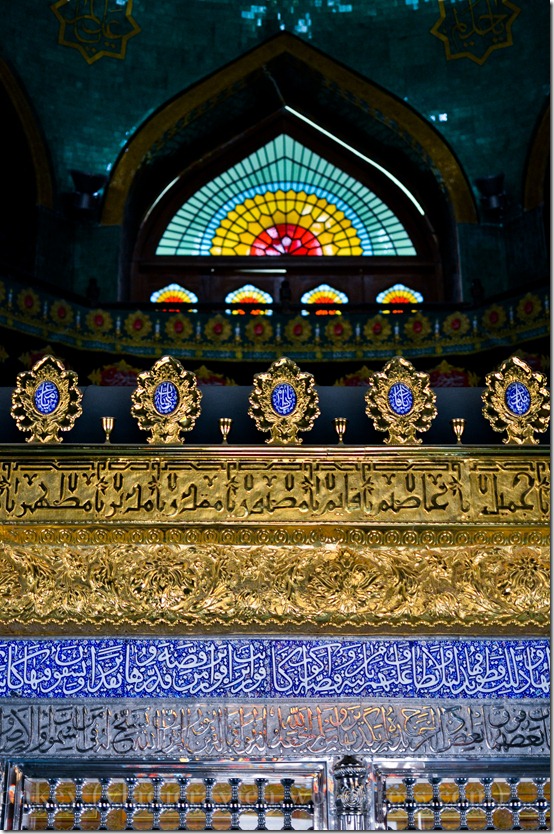 Dr. Nariman Gasimoglu, a religious scholar and director of the Baku-based Center for Religion and Democracy, explains that the pirs are ideal for what he termed the “secular religiousness” of the Azerbaijani population. “I’d estimate no more than 5% of the population practices the rituals and laws of Islam, but the rest consider themselves believers,” said Gasimoglu. He said that limited access to Islamic education and the authority’s crackdown on any centralized religious power meant that pirs – with their local character and idiosyncratic rituals – could flourish in the absence of more hierarchical Shiite religious authorities. 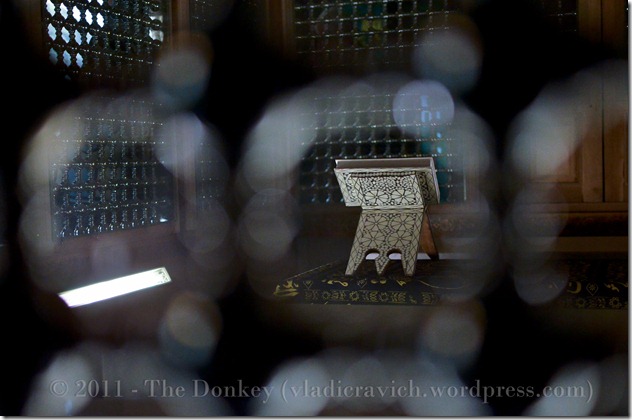 In and near Baku, the largest and most impressive religious structures are pirs. Filled with marble, carpets, intricate mirrors and glistening lights, observers say they are the most popular destination for locals and pilgrims alike. Many contain separate mosques within their walls. For example, the Mir Movsum Agha pirin Shuvelan – a town on the Absheron Peninsula near Baku – is open round the clock and receives hundreds of visitors each day from throughout Azerbaijan and beyond. An employee at the pir’s slaughterhouse said they collect enough sacrificed meat to provide assistance to approximately 600 local people. 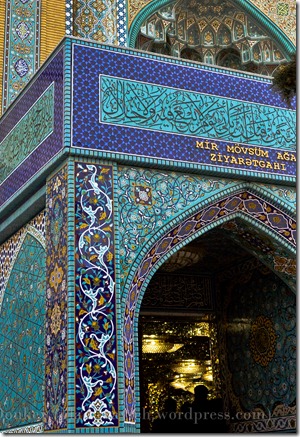 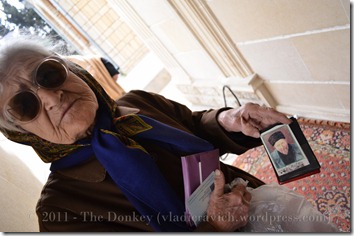 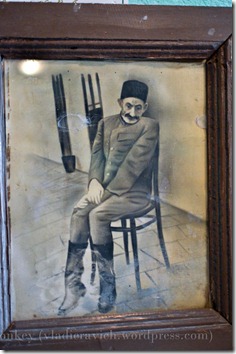 The pirs are most active during Kurban Bairam, the annual holiday that celebrates the story of Abraham’s acceptance to sacrifice his son’s life as an offering to God and the subsequent reprieve. “Kurban” means sacrifice and people routinely bring animals, sweets or money to the pirs when if their prayers have been answered.

A freshly killed sheep is sold in the village, which villagers say is similar to a sacrificed animal, in which case the meat would be free.

Far from the bustle and wealth of Baku, local pirs in villages are also growing as the religious taboos of the Soviet Union recede into history. “My grandfather knew all the history of this pir and this cemetery,” said Suleman Kindir, a twenty-five year old from the village of Pensar, near the southern border of Azerbaijan, “He also made this place more beautiful.” He is referring to the large murals depicting Imam Ali, Imam Hussein and various Koranic verses, all of which were commissioned in the last few years.

Suleman Kindir in his family's pir, in front of a mural added in the last few years depicting the death of Imam Hussein, a pivotal moment in Shii Islam. 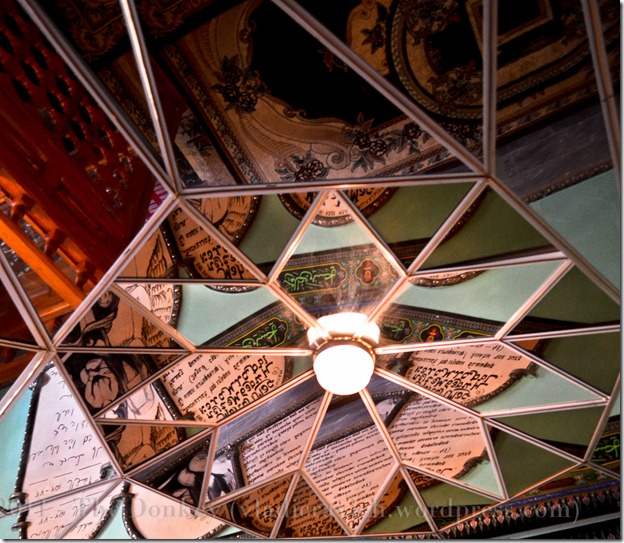 The glass ceiling of the pir in Pensar.

This is true throughout the country. In far flung Bash Shabalid – located in the mountains north of Sheki near the border with Russia’s Dagestan province – there is no shortage of stories about the locally revered Sheik Ehmed, his grandson Mullah Mustafa and the pir devoted to them. Mustafa’s contentious legend includes organizing a rebellion of 30,000 people in the 1930’s and – according to local lore – somehow eluding his subsequent exile and execution.

The pir of Sheik Ehmed and Mullah Mustafa in Bash Shabalid, a village at the base of the Greater Caucasus Mountains. 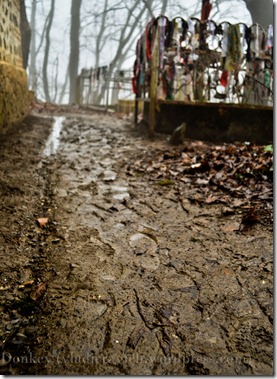 Dr. Bruce Grant, a professor at New York University, argues that these pirs serve as “portal to other world” for pilgrims and scholars alike. Rather than regarding these religious institutions as “quaint” or “charming local color that might help us encourage tourism,” Grant suggested that the pir has became more than just a site for other-worldly requests; it is also a living symbol of local history and identity, both of which have been instinctively hidden in a territory that has been fought over in civil conflicts and invasions from three distinct empires. 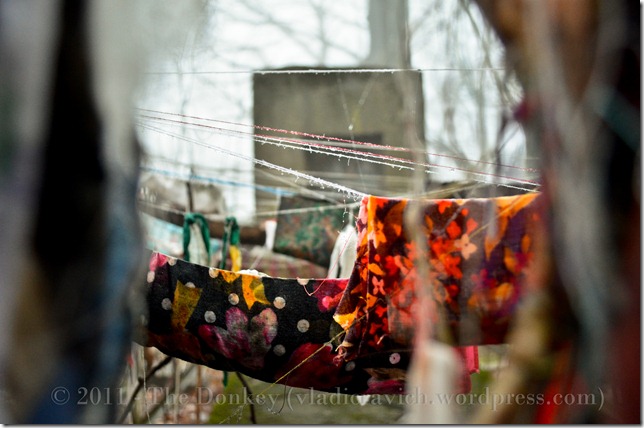 In an essay for the journal of Comparative Studies in Society and History, Grant catalogs the “social world within this brick and mortar” and finds it has remained vital throughout the 20thcentury, even as other local institutions were assimilated by central authorities. Whatever the mystical beliefs or actual history surrounding the pir, its gravitas in the community is hard to overstate today.

Local farmhand Shamil Salmonov recounted a story of a how two boys tried to repair the pirs’ roof during the purges of the 1930’s, only to be caught by a mysterious stranger who ordered them to return to the pir. “It was mullah Mustafa,” said Salmonov, “With a banquet laid out for the brave believers. In the morning, there was no trace of the mullah, not even the ashes of the fire could be found.” According to Grant’s fieldwork there are dozens of such stories even in the tiny community of Bash Shabalid.

Part of the reason the pirs have retained so much their local significance is many have partially escaped the worst of the Soviet era suppression of religion. Grant says there is archival and anecdotal evidence that pirs were more tolerated because “there was a real anxiety on the part of the government that if these shrines were shut down too, they would really have a problem on their hands,” said Grant. “According to archival materials, the government just didn’t take them all that seriously.”

At this pir in Mashtaga, it is considered good luck to weave in and out of the seven doorways of this outdoor grave.

The pirs, which for obvious reasons were usually located in cemeteries, could be accessed because funerary rituals were more tolerated than outward religious worship. “There is a clear pattern over the course of the twentieth century that whenever anyone was under the gun from state officials they would always say first and foremost they were praying for the dead,” said Grant. Whether it was policy or oversight, the pirs where spared the fate of most of Azerbaijan’s mosques and they became a last refuge for local collective memory.

According to Dr. Altya Goyushov, a religious scholar and professor at Baku State University and a visitor scholar at the UCLA, the growth of the pirs since the collapse of the Soviet Union is both a sign of change and continuity with the past.

The current expansion of pirs would not have been tolerated during Soviet times, but many other policies show the authorities resisting the growth of centralized Islamic institutions. “This government openly says [they] don’t have anything against religion, but mentally I think some part of old soviet tradition and view of religion continues,” said Goyushov. 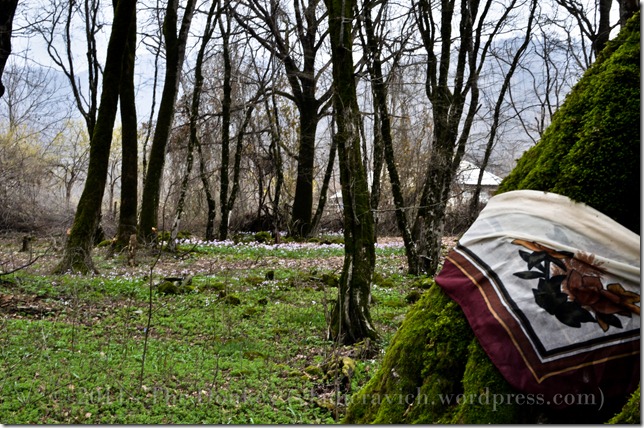 An barely marked pir - this spot in the wood is considered a holy place and good for easing arthritis pain.

Echoing the opinion of many Muslim clerics and religious observers, Goyushov said many Islamic acts such as undertaking the Hajj or establishing new mosques in Azerbaijan were “almost impossible today” because of the bureaucratic hurdles involved. He saw a parallel for Azerbaijan’s current decentralized religious climate: “The revival of the new pirs is some version of what was happening in the soviet times during the twenties, thirties and forties.”

Another pir in Pensar, this one run by a woman.

A woman in a chador walks along the streets of Nardaran, with the country's largest pir in the background.

The fate of this uptick in pirs remains to be seen. Both Gasimoglu and Goyushov expressed concern with financial transparency at the pirs, as did many local imams who cautioned that fraud and corruption were no less common in pirs than in other sectors of Azerbaijan life. They also said the pirs may lose ground as Islamic education trickles into the country.

But they also agree that the pirs – and the figures they are built around – go beyond theological questions. Many of the pirs are dedicated to people who resisted, or the very least ignored, the central authority. Mir Movsum Agha, for example, did not perform any Islamic rites, but he is seen as a symbol of a local icon who the Soviet authorities were unable to incorporate into their system.

1 Response to The Persistence of Pirs